We have some information about the roads in Almond Glen. Last week while checking the pool house Jon Rodman and Rob Smith noticed several work trucks gathering in the pool parking lot. Jon and Rob discovered several Lancaster County public works employees, two Lennar employees, and a contractor from “Red Clay Industries” were meeting to discuss the final approval process for the roads in Almond Glen. 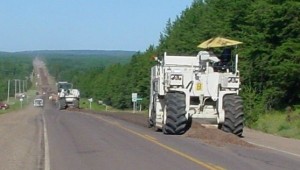 Jon and Rob tried to get some information regarding the road work, but it was painfully obvious that both the Lennar reps and Lancaster County officials had very little interest in sharing information with anyone outside of their group. Who could blame them? We were crashing the party and anything they said could be twisted up and passed along as rumor. We did manage to get a little bit of official information, so we will share that now.

According to Jeff Cato, Lancaster County Public Works, the roads will be completed in 3 phases. Phases 1 and 2 are being planned now and will be started “soon”. Phase 3 will be all of the roadways in the neighborhood which were built by Lennar.

Lancaster County has asked Lennar to reclaim all of the roads, not just some of them as we were originally told. Reclamation is basically a process of grinding up all of the roads and adding a concrete mix to the ground up road. This creates a hard base for the top layer of asphalt. Our understanding is the current code for this work is to dig in at least 9 inches. The reclamation in our neighborhood should be at least 12 inches. According to Jeff Cato, “You’re gonna get a good road”.

There are a few exceptions to the work that is going to be done. The cul-de-sacs will not be a part of the reclamation process. They will be checked, repaired if needed, and then topped with asphalt. According to Jeff, this is not uncommon. The sidewalks are not a part of the repair process. As the roads are handed over the sidewalks go to the HOA. We will be checking the sidewalks throughout the neighborhood and discussing any needed repairs caused by Lennars work crews. After Lennar leaves, repairs to sidewalks will come from the HOA dues. The roadway in front of the townhomes and all of the townhome parking lots will be HOA property. Lennar will repair these as needed as a part of phase 3.

Once the reclamation process begins you will be inconvenienced as the trucks and work crews do their work. We have NO WAY of telling you when the work will begin, how long it will take, or what roads are being done in what order. Again, it was made obvious that nobody wanted to dedicate to a timeline or anything too specific. You WILL be able to drive over the roads while they are working, but it will be rough and messy until the work is done.

If you park on the streets and you see work crews starting to do their thing, try not to be “that guy”. Move your cars into your driveway. Everyone has at least 4 off street parking spots, so it should not be an issue. If needed, the HOA will not tow cars parked in the pool parking lot during the reclamation process. If you need to move an extra vehicle to the pool lot during this process you may.

As always, we will pass along any information we get.