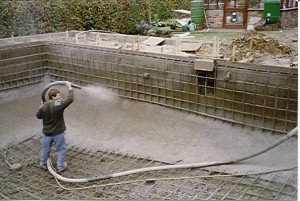 If you’re new to the neighborhood, or this site, or Facebook, or you just haven’t heard yet… The pool sank. I am pretty sure that by now at least 80% of our neighbors have heard the official word on this… But I wanted to just make it 100% official.

First, a little history for those who are new to the issue or for those of you who may have half of the story.

The pool was built by a company called Southern Pool. Sometime in the last few years someone noticed the deep end of the pool was starting to look a little, “Off”. After some testing it was discovered that the pool had indeed sunk on the deep end towards the hill behind the pool.

There has been some controversy surrounding the way the testing was done.  Apparently the pool was not completely filled with water and the testing was done over a period of 4 months. The argument has been made that the testing should have been over a longer period of time and that the pool should have been full of water in order to really see if the settling had stopped settling. A company named “Summit” checked the pool and has stated the pool has stopped settling. This testing was completed by Lennar. The ongoing argument has been that Lennar should fix the pool as they are the current builder and they are responsible for the neighborhood until they are finished here. Upon leaving the neighborhood Lennar must leave the neighborhood “in good standing”.

The original developer of Almond Glen started the HOA and established the neighborhood long before any houses where built in 2007. Eastwood built homes here until 2012. Lennar arrived in 2012 and bought all of the undeveloped areas of the property from Eastwood. Eastwood left and from what we can tell, dissolved their LLC. The original developer went bankrupt and is gone. Lennar is still here obviously, but its difficult to figure out what their total responsibility to Almond Glen is.

After Lennar arrived the management company started to talk to them about the pool and the problems it was having. Lennar then hired a consultant and began to evaluate the pool and later hired Summit to see of the pool was still settling. At some point Summit said the settling had stopped and Southern Pools gave a quote of about $50,000 to repair the pool. At that time Lennar stated they would pick-up 75% of the tab and the HOA would get the remaining 25%.

One major monkey wrench is the HOAs ownership of the pool and the property it sits on. Eastwood deeded the land and the pool to the HOA in 2010. When Lennar arrived 2 years later they didn’t buy the pool or have any discussions with Eastwood about the pool. Lennar of course sold homes to people with the promise of a nice neighborhood pool… so that probably helps us out.

Now, after months of discussion and worry as to Lennar’s sincerity regarding assisting with the pool repairs, we are getting close. Last week I spoke with a Lennar representative who filled me in and agreed to get the Board of Directors more involved with the repair process. We have received another quote from “JL Thompson Contractors”. This quote puts the repairs at about $35,000… and that includes a test of the soil that is under the pool to try and confirm there will not be issues in the future. After the repair is compete we will need to spend anther approximately $2500 to refill the pool. We are now waiting for some additional information and some final numbers from Lennar regarding their commitment to assist us.

Once started the repairs should take anywhere from 4-6 weeks to complete. The plan is to get all of this done before the start of the 2014 pool season.

As always, the board will keep you informed as we get more info.