When Vincent and Sue purchased their townhome in 2009 they, like many of us here in the AG, were buying their “perfect home”. When Sue was diagnosed with cancer in 2012 and slowly became more and more dependent on a wheelchair to get around; their “perfect home” became less perfect.

Due to the design of the sidewalks in the rear parking lot, Sue was unable to easily get to her vehicle. Vincent told us that he often had to guide Sue’s wheelchair down the hill in front of the townhome, through the grass, and then to the corner where the wheelchair access points were installed according to ADA (American’s with Disabilities Act of 1990) guidelines. The treks through the grass and around the entire building were dangerous, difficult, and often too much for Sue to bear.

Prior to the transfer of the HOA from the builder to the neighborhood, Sue and Vincent sent in a request for a wheelchair access point in the rear of their townhome. The request was a simple one, so they thought. After months of waiting for a response, and after a visit from a representative of Hawthorne (sent at the request of the builder controlled HOA to determine whether or not Sue actually needed the ramp) a work order was drawn up and an estimate for the work was obtained.

The homeowner-controlled board of directors received the request several weeks after taking control of the HOA on July 23rd. The estimate for the installation of a sidewalk wheelchair ramp; $1500. The board immediately contacted Hawthorne regarding the estimate and determined the builder controlled HOA board had decided the ramp would be paid for by the AG homeowners and that only one company needed to be called in for an estimate. 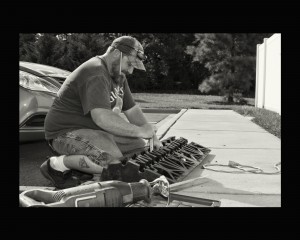 After some research it was found that the current design of the sidewalks, with wheelchair access points at the sidewalk-to-street intersections meets the current requirements set forth by the ADA. Though the Board of Directors understood Sue and Vincent’s need for the ramp, and the difficulties they were enduring while Sue battles cancer, it was impossible to ask the homeowners of Almond Glen to pay for the installation of a private wheelchair access ramp. Regretfully, the board of directors denied the request.

Realizing the need for the wheelchair ramp would still exist even though the question of whether or not the HOA was required to pay for one was solved, the board members felt compelled to help. Rob Smith researched options for a curb ramp and discovered an option, which would cost about $170. Board members Alicia Jones, Chris Martin, Brigida Deseree, and Jon Rodman joined Rob in the endeavor and the group, along with their families, donated the funds needed to purchase the ramp. Neighbor, and Block Captain volunteer, Spencer Kelly assisted by purchasing the tools needed to install the ramp and volunteering to install it.

On September 10, 2013 the ramp was installed and presented to Sue and Vincent